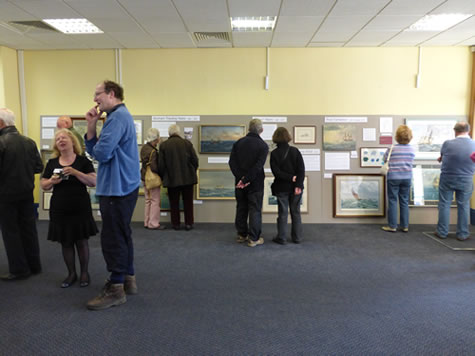 The largest exhibition yet of the work of John Chancellor took place in April 2014 and was a huge success, with 800 visitors over three days. The exhibition, featuring 65 pictures, was held in John’s former home town of Brixham, Devon and was put on by his family to commemorate the 30th Anniversary of his death.

The exhibition told the story of John’s life: his 30 years as a seaman and his career as an artist. Exhibits, many which had never been seen in public before, included an astounding ink drawing of a ship drawn when he was just five years old; portraits and paintings of warships from his Merchant Navy years; two paintings depicting a actual incident when he was nearly lost at sea; early pictures featuring his beloved sailing barges; studies of Brixham trawlers; and his more recent and better known paintings. It also displayed a variety of memorabilia, including his paint brushes, research tools and personal items.

It was clear that despite being 30 since John’s sudden death at the age of 59, his name is still synonymous with the Torbay area and many local people personally still remember him and his remarkable work. But visitors were not only from the Brixham area, they came from far and wide, to see this rare one-off collection of the work of John Chancellor.

John lived and painted for more than 20 years in Brixham, was a much loved man, who despite his increasing status as an internationally renowned maritime artist, was warm and self-effacing and liked by all those who knew him. He was gentle by nature and always willing to spare time to help others, especially to support other artists and give advice.

His daughter Tessa, who organised the exhibition and runs this website said, “It was wonderful to speak to so many people who remember him and who still marvel at his paintings. There was a real feeling of warmth amongst those who attended, as if we were all sharing being part of a big John Chancellor family!”

The magnificence of John’s later portrayals of sailing ships captured the hearts of all who came. His incredible detail, shown by enlarged copies of small parts of the paintings, astounded even those who already knew of his work. Magnifying glasses were on hand for closer inspection, creating gasps of admiration as visitors discovered tiny detail in the pictures. 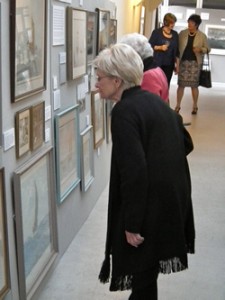 More than 20 of John’s paintings have been reproduced as limited edition prints, most of which are sold out, but 12 are still available through this website. Of particular interest as souvenirs for both local people and holiday makers were the two prints, ‘Easterly Haze’ and ‘Coasting’, which depict sailing ships off Berry Head and Start Point respectively.The new, 52-page brochure about John Chancellor, itself limited to 500 numbered copies and still available through this website , was launched to coincide with the Exhibition and sold well, providing a lovely keepsake of the event.