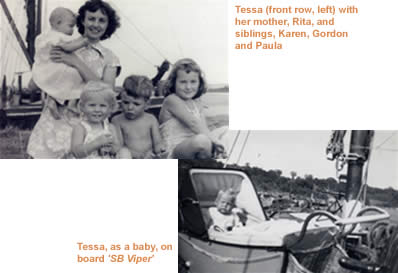 Tessa, one of four of John’s children, reflects on her memories of her father and tells of her delight in having the opportunity to take over the selling of the remaining limited edition prints, published by Triton Gallery.

My father was a man not only deeply committed to the sea and latterly his paintings, he was a man who valued family life, being a devoted husband to my mother and an exemplary role model to me and my siblings.

As a family we enjoyed an unusual mix of experiences, with all four children being born on board the sailing barge ‘S B Viper’ and for me, many memories of life aboard until the age of seven. Always inventive and a perfectionist to the core, my father meticulously converted the barge, with my uncomplaining mother, then his fiancé, working many, many long hours to make it into their marital home.

Memories aboard of the bath – raised so high on top of the water tank we had to climb a ladder to get in and so big we all bathed together – and a toilet, which had to raised like a throne to get it above the waterline in order for it to flush. This arrangement was a constant and irresistible invitation to me to push my doll down the outlet pipe, and the doll would then have to be retrieved overboard by my father when the tide was out! Always creative, as the family grew, my father solved the ever-increasing problem of galley space by cutting a hole in the centre of the small galley table, where my younger sister and I would sit, eating outwards as the rest of the family faced us, eating inwards.

We would occasionally remove the gangplank and sail the barge, with us children in lifejackets, oilskins and attached with safety harnesses. I remember our first sail after the installation of our first telephone – a Bakerlite model with a drawer at the bottom for recording numbers – which had to be disconnected when away from the land – and my father’s surprise that the ‘phone never rang when we were at sea! The memories are many from those times, but the abiding visions I have are the lop-sided birthday cakes and jellies we were presented with as children! If ‘Viper’ settled down at an awkward angle on her mud berth at low tide, not only did she have a severe list, but so too did my mother’s culinary efforts!

As I grew older and understood more about my father’s work, I admired him increasingly. He was wise, gentle and patient and a constant source of inspiration to me. I grew up learning through him that customer care is paramount and attention to detail in all things brings rewards and sets one job up above another. Definitely ‘my father’s daughter’, I have inherited his need for perfection in all my work and my career in marketing and public relations has always benefited from the skills I learned through him. In his early days of painting professionally, I was proud to have helped promote his work and 30 years on, it is with a huge amount of pride and pleasure that I am involved again now.

Until recently, John Chancellor’s work – be it original paintings or limited edition prints – have been available through Triton Galleries in Torquay. Following a change of direction, Triton no longer deals in classic maritime art and I have taken the opportunity to purchase the back-stock of Triton-published limited edition John Chancellor prints and make them available through this website.

I wholly believe in my father’s work and know his pictures will be sought after, not only by past followers, but by a new generation of seamen and those who appreciate the magnificence of the sea and who understand its power over the vessels who sail on her. My father was in awe of those ‘heroes’ who mastered the old sailing and merchant ships, without the benefit of modern technology, and whose skills largely went unsung. He would be delighted to be keeping the promotion of his work ‘in the family’ and I will honour that by providing the very best in customer service and attention to detail – he would expect nothing less.